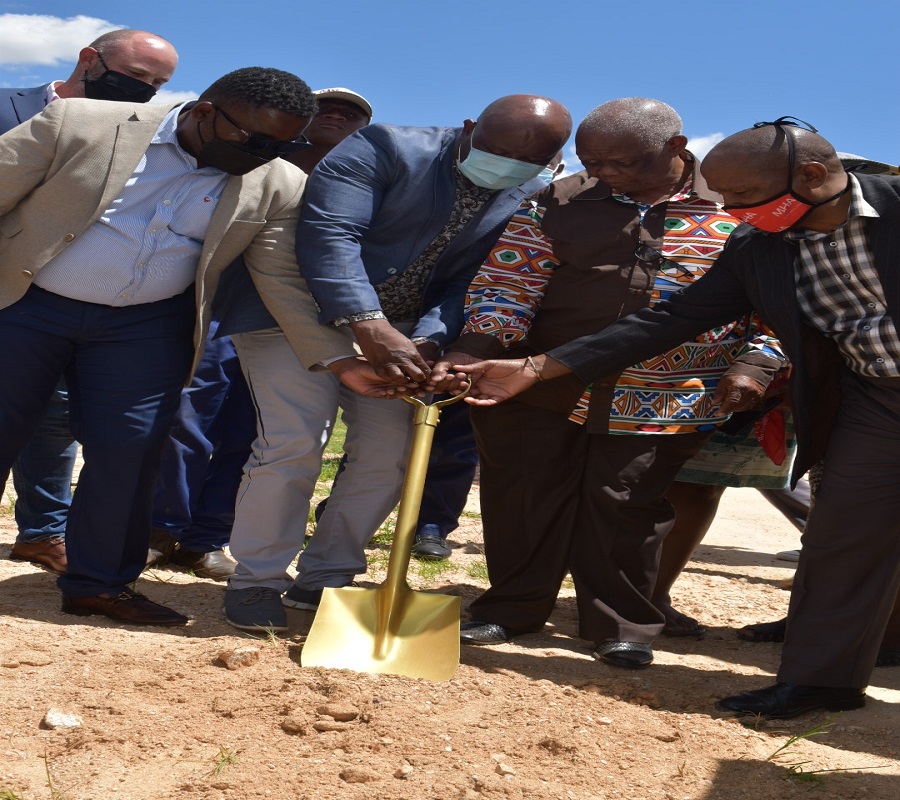 MADIBOGO: - Ratlou Local Municipality: 22 January 2022: Part of the long awaited construction of a 26 kilometres road (D1727) from Madibogo through Madibogopan to intersection between Stella and Delareyville soon to be a dream comes true. The community of Madibogo and Madibogopan under the Chieftaincy of Paramount Chief Gaesegwe Phoi has for many years stood the ground and cried unto Provincial government and the local Municipality to provide them with a tarred road since the gravel road linking the two villages was irreparably in bad and dangerous conditions.

This Sunday morning 22 January 2022, the MEC for Public Works and Road in the North West Province, MEC Oageng Gaoage Molapisi accompanied by the local Mayor Cllr Matlhomola Jafta, officially led the sod turning of the construction of the 13 kilometres upgrading from gravel to surface standard of road Z482 from Madibogo to Madibogopan and introduced Tau Pele Construction as the company that will be constructing the road. The project is part of the 26 kilometres into D1727 road between Stella and Delareyville that was initially requested by the community.

Speaking at the occasion held at Madibogo and Madibogopan respectively, the MEC said the completion of the project worth 73 Million and nine hundred and fifty thousand rand (73, 950, 000, 00) is expected after 13 months (one year and one month), however, this could only happen if there is no disruptions and unnecessary work stoppage of the construction by members of the community.

MEC Molapisi further added that thirty percent (30 %) of the construction work will benefit the local Small and Medium Enterprises that will sub-construct under the main constractor and further create employment for over 60 people from the community. Molapisi commended the community for standing their ground when requesting services such as roads, clinics and school, however, he urged the community not to distract. burn or damage any government property whist on the other hand demanding other services. Saying the road is part of improving service delivery to the area and extensively reiterates the importance of giving jobs to local residents of the two villages to capacitate and give skills the unskilled labour force.

Also speaking at the sod turning, Ratlou Mayor Matlhomola Jafta expressed his gratitude that the government has responded to the community`s grievance of many years and had led to a number of disruption that ended in burning of the school and closing the roads. He committed before the community that as new council their mandate is to deliver the much needed services.

On behalf of the Chieftaincy, Kgosikgolo Gaesegwe Phoi stressed fact that the area was neglected for a very long time and at times the concerned residents were forced to take it to the street to demonstrate their frustrations, however, he welcomed all the efforts by government to bring services to the people commending that this will be history when the road is complete and finally handed over to the community.

The delegation of the MEC to Madibogo and Madibogopan included the Mayor of Ratlou Municipality Cllr. Matlhomola Jafta, Ward Councillors for both ward 7 and 9, senior officials of the department and project management team.